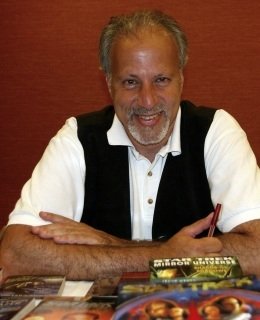 Michael Jan Friedman is the author of 80 books of fiction and non-fiction, nearly half of them set somewhere in the wilds of the Star Trek universe.

In 1992 Friedman wrote Reunion, the first Star Trek: The Next Generation hardcover, which introduced the crew of the Stargazer, Captain Jean-Luc Picard’s first command. Over the years, the popularity of Reunion has spawned a number of Stargazer stories in both prose and comic book formats, including a six-novel original series.

Friedman has also written for the Aliens, Predator, Wolf Man, Lois and Clark, DC Super Hero, Marvel Super Hero, and Wishbone licensed book universes. Eleven of his titles, including the autobiography Hollywood Hulk Hogan and Ghost Hunting (written with SciFi's Ghost Hunters), have appeared on the prestigious New York Times primary bestseller list, and his novel adaptation of the Batman & Robin movie was for a time the #1 bestselling book in Poland (really).

Friedman has worked at one time or another in network and cable television, radio, business magazines, and the comic book industry, in the process producing scripts for nearly 180 comic stories. Among his comic book credits is the Darkstars series from DC Comics, which he created with artist Larry Stroman, and the Outlaws limited series, which he created with artist Luke McDonnell. He also co-wrote the story for the acclaimed second-season Star Trek: Voyager TV episode "Resistance," which guest-starred Joel Grey.

In 2011, Friedman spearheaded the establishment of Crazy 8 Press, an imprint through which he and other talented authors publish their purest and most passionate visions. Crazy 8 Press currently features more than 70 original titles.

Friedman's website is michaeljanfriedman.net. As always, he advises readers that no matter how many Friedmans they know, he is probably not related to any of them.